Museum Selfie, you too #Redcrossmuseum?

It is not a recent development that artworks exhibited in museums are “photobombed”, that selfie sticks poke fun and fellow visitors and that the staccato of default snapshot sounds drowns the once all too well known humming of the air conditioner. After being undermined long-enough, the restrictions on taking pictures in museums and galleries were gradually lifted in many places. As guards saw themselves outnumbered by the ardent champions of the right to take a selfie and as museums were referred to as being archaic and losing out on the new generation, the #MuseumSelfie day signaled a new dawn.

Irrespective of whether you believe in selfies as promoting a more participatory experience that opens up museum doors to underrepresented constituencies and invites for more in-depth reflection about the object in focus or whether you see the devil’s work at play that distracts from “quite, pensive, private” contemplation of artifacts, there should be limits to museums encouraging visitors to face their smartphones at arm’s length. 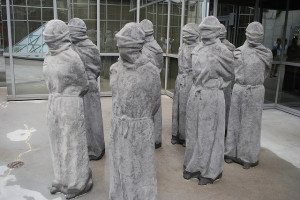 On my first visit to the International Red Cross and Red Crescent Museum in Geneva, I stopped at a large poster hanging by its main entrance. It animated visitors to take a picture of them and Carl Bucher’s 1979 sculpture “The Petrified”, an anonymous group of blindfolded and handcuffed stone figures, before uploading it on Instagram together with the museum hashtag. You are invited to look up the pictures on Instagram (here), which carry the hashtag.

A great number of the pictures is deeply disturbing to me. You see people self-staging, pulling faces, doltishly hiding behind the figures and showing the victory sign. When you see people “duckfacing” into the camera amid this stone monument you realize that you hit rock bottom. These pictures are not only evidence of willful ignorance about the artwork’s content and a remarkable lapse of judgement on a moral terrain, they also give testimony to the fact that any pedagogical intent of the museum has in most cases been painfully subverted. Instead of paying tribute to human rights defenders and honoring those held captive, who deprived of all their freedom still express “their dignity” through their bodies as the artist once said, these people cruelly impose their perceived own freedom on the work and everyone it represents. Thereby they perpetuate the very contempt and deprivation the artwork is conceived to rebel against.

Dear curators, why is this poster still up? You’re museum is fantastic and doesn’t merit such an entry sign.

« At a Glance: Recent Publications The geography of climate change inequality »