More than one story – Street vending in Malawi

Clouded in the smoke that rises up from the debris of dismantled vending barracks the evening traffic lines up into Malawi’s capital city Lilongwe. That evening the normally bustling sideway stretches are deserted. Onions, cassava leaves and maize lie scattered on the sandy ground. Once more a Malawian Police ‘clean-up’ operation aimed at removing illegal street vendors clamped down on violent resistance. Vendors report how police officials fired rubber bullets and tear gas into the crowd before setting their market stalls on fire to prevent the vendors from returning. Two days later two police men seemingly unperturbed are busily bargaining with street vendors over two suit trousers at the other end of Malawi’s capital. Standing next to them the pavement-shopping bank clerk Benson explains that many would prefer the convenience and good prices in the streets over the markets.

While city by-laws in Malawi prohibit the unauthorized sale of goods such as staples or consumer goods outside of demarcated ‘flea markets’, oversimplified narratives about the causes for informal vending pervade and obscure the public discourse. As the two anecdotes suggest the debate about street vending is multi-facetted, it is dominated by vested interests and waged on various levels from complicit customers, profiting wholesalers, dutiful and corrupt police officials up to politicians. The result is a protracted situation in which a cycle of relocation orders, often excessively brutal evictions and the subsequent returns of the vendors becomes perpetuated that leaves the lives of thousands in turmoil.

The issue of sufficient space in the designated market areas appears to be the lynchpin of the debate waged in the streets and in the newspapers. “The challenge that we have had ever since the issue of relocation surfaced has been space and essential amenities like toilets,” explains Blantyre Vendors Association chairperson Innocent Mussa. Vendors have put it on their banners to leave the streets if more space in the markets were created for them. Officials hear their complaints, but widespread action is not taken. Rather, they bemoan that street vendors shirk taxes and market fees, thereby draining the public coffers that among others are supposed to fund market expansions. Mandasi-vending Owen retorts that amenities such as robust market infrastructure, security and proper sanitation facilities, which are supposed to be funded with tax money, would be woefully lacking.

This logic creates the impression of a situation that has become deadlocked. 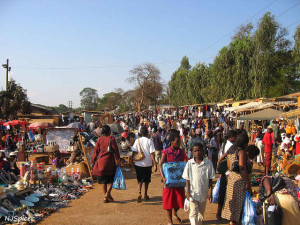 However, the debate on street selling has much more depth to it. Street vendors in fact benefit from impulse purchases of customers in the city, whom they can follow and negotiate with without having to defend rival offers. Oftentimes it’s a more lucrative business compared to staying on the market grounds. This has been linked to clashes between street vendors and those residing on the market places in which market vendors violently chased unregistered traders away from clogging the market entries. The arguments advanced by the authorities that street vendors contribute excessively to the litter in the streets and open doors to robbers by congesting the streets are equally half-true at best. Essentially these are attempts to score easy points in the population by shifting the blame for dirty streets and high case rates of street theft onto the shoulder of the vendors while helping the cities to escape greater scrutiny of their own failures in providing public goods.

But amid this web of competing interests the probably most powerful and least talked about is the instrumentalization of the vendors through the political parties. Eager to win the favor and votes of the vendors in the run-off to the presidential elections 2014 the ban on street vending was not enforced by Joyce Banda’s People’s Party. The topic of street vending was skillfully excluded from the campaigns on all sides and discreet promises were made locally in exchange for political support. Once in power this time the ruling UDF government of Prof. Mutharika sanctioned ‘clean up’ campaigns in the inner cities and soon conspiracies began to rage that different parties were sponsoring criminals to hide amongst the vendors and to create havoc in the streets. Finger pointing government and opposition charge the other party’s economic policy to be responsible for the perceived surge in informal vending.

Even though the chronic job shortage plays a major role in pushing Malawians into informal vending – in 2011 the OECD reported how every year 130,000 new job market entrants compete for 30,000 created positions – urban street vending can in fact offer a viable income stream in a country in which almost 75% of the population eke out a living on less than $1.25 a day. “With eight other women we managed to secure a bank loan to start buying a large bundle of second-hand shoes and clothes”, Mary, a former hotel waitress says. “I left my previous job because I can earn more now by selling these items. I buy iron rooftops with the money I get and in two years I can perhaps build my own house”. Sitting next to her, Binson, a grade four drop-out, sells T-shirts and eyes enviously at Mary’s display. He says he was forced to sell in the street, because his family doesn’t have land for farming and he wouldn’t get any job. Even his brother with an accounting certificate would sell secondhand clothes. The heterogeneity among the vendors is perhaps their most striking characteristic with some having formal ties to banking and others carrying all their savings on their arms. “The vendor community is fairly representative of the Malawian society,” argues legal activist Edge Kanyongolo.

It is this recognition, which precedes any truer understanding of the fates of Malawi’s street vendors.

« Pay after the job is done At a Glance: Recent Publications »